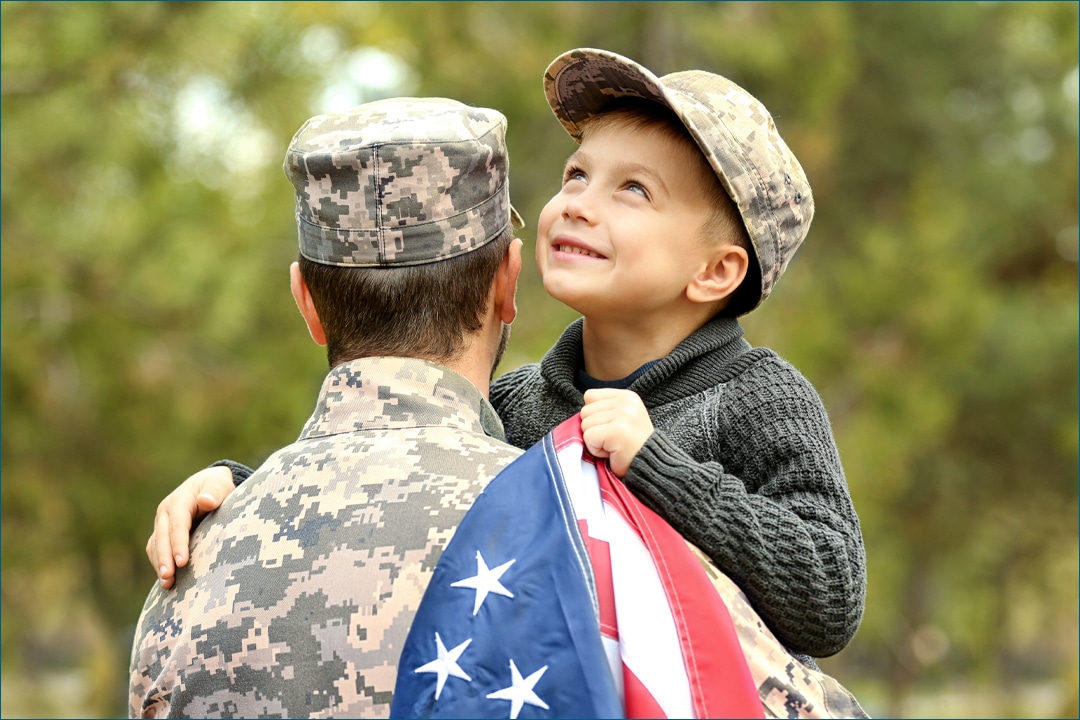 Deciding on child custody arrangements can be difficult and stressful for parents in any divorce or split. However, when this occurs during a military divorce, the rules are different and complicated. Depending on their rank and in which branch they serve, a parent can work odd hours or in a different state or country. They may be deployed on short notice or required to live on base. Sometimes military service can involve a level of uncertainty, regardless of your love for your child.

The Charlotte military family law attorneys have specialized experience handling all types of divorce, child custody and child support matters. Our leading attorneys, James Epperson and Steve Ockerman, are former U.S. Military JAG Corps officers, and each have decades of experience in North Carolina law. We work with military families to protect the best interests of you and your children.

Will my military service hurt my Charlotte child custody case?

Service people should not be treated any differently than civilians when it comes to issues of family law, and that includes child custody matters. Military personnel actually have special protections under the law – North Carolina G.S. Chapter 50-13.2 states specifically that a parent’s military deployment can’t be used as a basis for a child custody action.

When handling child custody issues involving military families, the court must consider the same factors as non-military families – so your military status shouldn’t negatively impact your child custody case. However, we understand that service members have many concerns that a judge might view them as unsuitable caretakers due a potentially unstable lifestyle. This is a valid concern, as the courts do put the best interests of the child above everything else and it’s true that military deployments can, in some circumstances, disrupt a child’s life.

This is why child custody matters can be difficult, but our attorneys can work with you to help ensure the best possible outcome for you and your family.

Can my ex-spouse change our custody agreement while I’m deployed?

We speak to many clients who are worried that their ex-spouse may use their deployment to attempt to take custody of their child or children while they are away. The thought of being out of the state or out of the country while your ex begins a custody battle can cause a great deal of anxiety – and this is understandable.

Fortunately, as a service member in the armed forces, you are provided certain protections. One of these is called the Servicemembers Civil Relief Act (SCRA). Among many other protections, the SCRA puts an automatic stay (or halt) on any civil or domestic legal proceedings that involve a military service person. So, if the parent files a custody action while you’re actively deployed, the case will be put on hold (usually for 90 days). In the meantime, you’ll be notified about the action (if you’re reachable), but the case won’t move forward until the 90 days expire or a judge extends the automatic stay.

How does my Charlotte parenting plan work if I’m deployed?

It’s important all divorcing parents have a thorough parenting plan that describes the details of their child custody agreement. And it’s even more crucial if you or your spouse is in the military. If you’re uncertain about where you may be deployed or for how long, you should include alternate plans for all types of possibilities. If a military parent expects to live on a base close to their child, the parenting plan may call for visitation that works around the free time for that parent. Or, if a military parent is deployed overseas, a parenting plan should have a plan to account for that as well. There should be contingency plans that include ways for parents to consistently communicate with their child and the other parent.

If your parenting plan is already in place but has no stipulations for deployment, you may want to consider a modification to your court order. Our Charlotte military family law attorneys can provide more detailed guidance.

What is the Uniform Deployed Parents Custody and Visitation Act?

North Carolina’s Uniform Deployed Parents Custody and Visitation Act (UDPCVA) prohibits the court from using a parent’s deployment (past or future) as the sole basis for child custody decisions. It also allows the courts to use an expedited process to handle child custody issues when a parent is preparing for deployment.

Additionally, the UDPCVA allows parents to place a special and temporary agreement with the court while a military parent is deployed. This agreement must be written and signed by both parents and filed with the court with the understanding that it expires when the deployed parent returns. The temporary agreement can assign caretaking or guardianship to a noncustodial parent (or nonparent) when one or both custodial parents are deployed. The parent can also agree to specific times and means of electronic communication between the child and the deployed parent.

Where do I file for custody of my child?

Custody cases are typically filed in the state where the child is currently residing, so if your child lives in North Carolina, you’d file for custody there. Your child must have been living in the state for the past six months, or the court may consider another state if the child has significant and important connections, like family, teachers or health professionals.

As a member of the United States Armed Forces, you’re afforded many rights and protections as a parent during divorce and child custody issues. It’s important to understand and preserve these rights to ensure your continued valuable time with your child. We can help you make informed decisions about your future.

The divorce and child custody lawyers at Epperson Law Group, PLLC understand the unique and complex issues that military parents face. Whether you are seeking visitation rights or filing for sole custody, our family law attorneys can work with you for the best possible outcome for both you and your child. Contact us today. We’re just across the road from the Home Depot off Ballantyne Commons Parkway. To reserve a consultation with one of our lawyers in Charlotte, Boone, or Weddington, please call 704-321-0031 or fill out our contact form.

Can a child refuse to follow a visitation order?

Child custody: Health insurance and health care for your child

Custody modifications must be in the child’s best interest

Is the 60-40 custody plan right for your children?