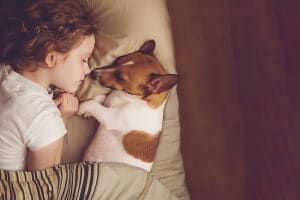 Divorces take their toll on spouses and children. After months or more of fighting over alimony, what’s the best child custody arrangement, who gets to keep the home, and a variety of other issues, there may be one last obstacle to overcome – and it’s a doozy.

Who gets to keep the family dog?

Pets are property, not people

We know that people love their pets, and figuring out who keeps Fido is often one of the most contentious battles couples fight. For some, it’s a matter of ensuring the dog stays with the kids (“Kids need dogs”). For others, it may be able keeping control (“You took my marriage; you’re not taking my dog”). In some cases, it’s about keeping the beloved pet you brought into your marriage in the first place (“He was my dog first”). “A 2014 survey conducted by the American Academy of Matrimonial Lawyers found a 22% increase in pet custody hearings in divorce court, which shows how important (and heated) this issue is,” according to Rover.com.

We understand. But the courts don’t, and in North Carolina, the family pet is just another piece of property to be equitably divided during a divorce. Unless you and your spouse can agree on a plan for Doug the Pug, the judge is going to decide who retains ownership rights of the family pet.

How do judges decide who keeps the dog in a NC divorce?

It depends. In our years of experience, we’ve seen judges make snap decisions, and we’ve seen them pore over evidence. Typically, they’ll look at who is in the best position to care for the animal, but there are some other factors that may come into play:

One way to resolve who gets ownership of the dog is through a prenuptial agreement. Nobody marries with the hope of divorcing, but a premarital agreement can include a provision for the family pets.

Just as with children, the best interests of the dog should be considered. Spouses need to review who will be able to spend time with the dog, walk the dog, feed the dog, take the dog to the vet if problems arise, and other dog-related issues.

Charlotte family law judges and mediators understand how important pets are to people. Still, they are normally not inclined to want to spend much time deciding which spouse in a divorce keeps the family dog. At Epperson Law Group, PLLC, our lawyers help you prioritize your claims and work out agreements for many parts of your divorce case. When spouses can’t agree, we explain to judges why your dog is so important to you and your children. Call us in Charlotte, Boone, or Weddington at 704-321-0031, or visit our contact page, and schedule your consultation today.