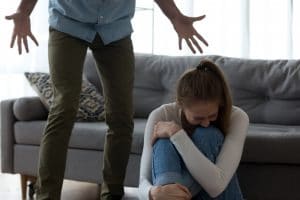 Domestic abuse often involves verbal, physical, and sexual abuse. However, it can also include manipulative, grooming-like behaviors that can create a situation that is challenging to leave. This is called “coercive control,” and it is often a precursor to physical or sexual abuse.

Coercive control is defined as behavior that is strategic, oppressive, and terroristic. It is performed to instill fear in one of the partners in the relationship. Coercive control can happen to anyone in a relationship, but anywhere from 60 to 80 percent of women who seek help for domestic abuse say they have experienced some type of coercive control.

What are the signs of coercive control?

There are 12 signs of coercive control for you to be on the lookout for if you suspect abuse in your relationship or the relationship of someone close to you:

Gestures like these are what’s known as “love-bombing,” according to Chitra Raghavan, a forensic psychologist at John Jay College of Criminal Justice. As Dr. Raghavan told the New York Times, “The gestures may seem sweet, thoughtful, but they’re a test: Monopolizing a partner’s time and attention sows isolation and shows the abuser ‘that he can control her.’”

Coercive control often leads to serious violence in relationships. One out of every four women and one out of every seven men will experience severe violence in a relationship during their lifetime in the United States. This violence is the top cause of homicides in females, according to the National Domestic Violence Hotline. This is why States need to address the issue legislatively.

What have legislators done to address coercive control?

Coercive control was banned in the United Kingdom in 2015. This behavior is not illegal in the United States. Charges can only be filed when a crime has been committed against the victim. Despite this, lawmakers are starting to listen to victims of coercive control.

Making a plan to leave an abusive partner

When you are ready to leave with your children (if you have them) and break the cycle of abuse:

Domestic abuse shelters in and around Charlotte, NC

If you are the victim of domestic abuse, you can receive help at the following shelters located in and around Charlotte, NC:

It takes an average of seven attempts for the victim of domestic abuse to leave their abuser, according to the National Domestic Violence Hotline. Survivors struggle with fear, shame, financial insecurity, destabilizing the home, social justice, and other personal reasons, which can make leaving difficult.

We understand, and at Epperson Law Group, PLLC, we will do whatever we can to help protect you and your children. You have options. Our experienced Charlotte family law attorneys can explain them to you. Call our office at 704-321-0031 or complete the contact form to schedule a consultation. The Epperson Law Group has offices located in Charlotte, Boone, Concord, and Weddington, and serves clients throughout North Carolina.